Breathe in the DNA of London rock city

In March 2020 we released our first video clip with the current line-up. Soon "So Bad, So Good" climbed to # 3 on the ReverbNation London charts.

Then the global pandemic hit the world.

Due to the paralysis forced by the lockdown, creativity took a different path. Artists and audiences became one digital tribe, socialising on social media and on the internet, nevertheless our creativity was and is as vital as ever! In Summer 2020 we worked on new video projects while "So Bad, So Good " hovered around the #3 spot for months!

Guy and Nadya slipped away for the recording of an acoustic duo video, moreover we had the honour to work with the international award-winning producer Eamonn Molloy (formerly known as Eamonn Collinge) on the video to the track "One Day Late, One Dollar Shy".

We are so grateful for the support and encouragement we receive from friends and fans, and those who are not yet part of the family: connect with us on social media, check out our ReverbNation page, listen, watch and become a fan.

You want to buy our music? Look here.

Crow Jayne lives and works in the cradle and capital of Rock music: London UK. All of us were inspired by the proliferation of music coming from London during  its 60s & 70s heyday or have been nourished by the aftermath of what led to the British Invasion.

The amalgam of Blues and Folk, which forged Rock music, led to the birth of new genres, which fed back to rock itself.

This energy is the constant heartbeat of our home town, inscribed in the DNA running through our veins, which is what ties us together in the studio and on stage, intoxicating audiences with "Funky Rock with Attitude," as our drummer Russ calls it.

We are a quintessential British rock band with an exquisite, heady retro vibe.  Every member at the top of his/her game and all are driven by true passion and  professionalism.

Serendipity gathered us all together

Guy is the mastermind and founder who -  with these musicians -  found a family which can finally make his visions come true.

Jake's impression of Guy's and Nadya's spiritual kinship is mirrored in Nadya's perception: "I meandered into Guys life when we played together in a local covers band, it wasn’t our bag, either of us'…! We split off on our own as our Jimmy Page and Janis Joplin personas were let loose and Crow Jayne began to re-emerge from a deep sleep like a naughty dream... "

When your personas are let loose you need someone to ground you. And obviously this is Russ' and Jake's task besides being the backbone of the band's sound.

Respect for each other's craft defines the working process

My thoughts on Crow Jayne… 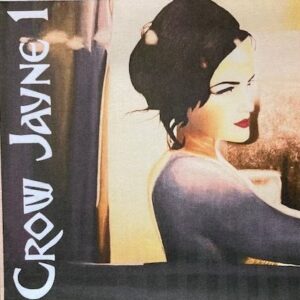 Crow Jayne came to my attention via Andy Adams who tagged me on Facebook with their YouTube clip video for One Day Late, One Dollar Shy…

Crow Jayne are led by guitarist Guy D’Angelo who we first met at the Led Zep Knebworth anniversary TBL meet at the Atlas pub in 2019.

Here’s my thoughts on it:

Crow Jayne have the classic four-piece line up of vocals, guitar, bass and drums. them. 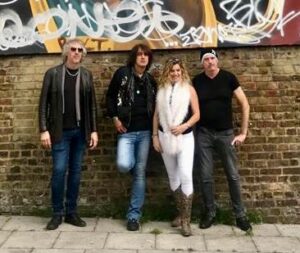 Their influences are very much rooted in the 70s and Guy is a big Jimmy Page fan. This, unsurprisingly is a key ingredient in their sound. However, while they are highly derivative, Crow Jayne have a refreshing quality about them and a genuine self -belief in their abilities.

So, here’s my thoughts on their first recording:

One Day Late, One Dollar Shy opens with a Hendrix like swirl before kicking in to an infectious muscular riff. I noted a brief nod to Zep’s Over The Hills And Far Away in the chord sequence. Bassist Jake Sherlock and drummer Russ Wilson hold it all together with steady precision over Guy’s guitar histrionics. Nadya Slade’s vocals have a distinct air of authority as she makes herself heard in the mix..

A cover of Paul McCartney’s Maybe I’m Amazed is performed in the brash arrangement The Faces adapted for the version on their Long Player album. This is a perfect showcase for Nadya – while her influences may lay in classic female singers such as Janis Joplin, there’s an English lilt to her voice that is similar to Vinegar Joe era Elkie Brooks.

English Rose is a pretty acoustic instrumental. Opening in the vein of Jimmy Page’s White Summer it then switches into a pastoral piece that reminded me of Doug Boyle’s impressive playing on Robert Plant’s Liars Dance.

Edge Of Love mirrors the bottleneck guitar effect of Hat’s Off To Harper and the pure acoustic playing of Black Mountain Side.

There’s some atmospheric percussive additions and Nadya’s vocal undergoes various treatments as she relays some time honoured bluesy ‘baby -baby ’ mannerisms – eventually signing off with ‘’Yeah baby’’ and a laugh.

So Bad, So Good picks up the pace being a strident drum led rocker. Guy’s wah- wah solo has a cascading Zep 1 feel about it. This number can be seen on their YouTube channel.

It’s back to the acoustic for the bluesy work out 17 Days which is mainly a two hander between Guy and Nadya. Her vocals here have a touch of Stevie Nicks influence. It moves up a gear for a Bron- Yr -Aur like stomp.

Toni’s Smile is another acoustic instrumental showcase for Guy – gentle and reflective.

Finally, Betta’ Ride – this is an out and out blues showpiece and very much in the Zep I Can’t Quite You Baby/You Shook Me mould. Harmonica adding to the effect.

Summary: My reference to their Zep like soundbites is merely to illustrate where their roots and influences lay – plainly Crow Jayne are much more than a Zep copyist outfit – there’s an originality and vitality in their playing, which would make for a great live experience. Until that opportunity presents itself sometime ahead, I look forward to further music from a band that are well worth checking out…

Here’s the link for more details of the band and the availability of their music:

Here’s the link for their excellent One Day Late, One Doller Shy YouTube clip: